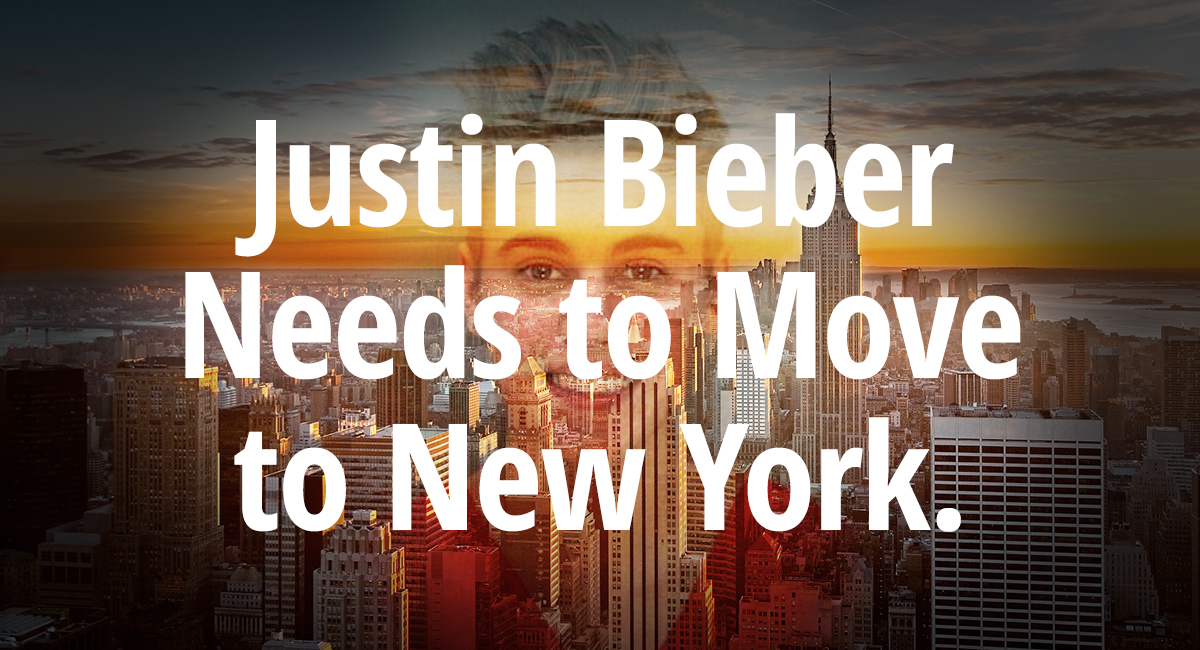 Justin Bieber and his latest shenanigans have been dominating the news lately. His recent DUI arrest blew up Twitter, with hashtag wars raging between #FreeBieber and #DeportBieber still going strong. No matter their reaction however, the lovers and haters of the pop star can agree on one thing: he needs a change somewhere.

Let's dash a few things about The City That Never Sleeps established and talk about how it could boost Justin's career and mature him as a celebrity.

You think that Justin Bieber has enough media attention now? Well the media coverage in New York City is constant, brutal, and unmerciful. Celebrities can't show their face outdoors without the paparazzi popping bulbs. Everywhere you go, everything you do, say, or think is going to be analyzed, scrutinized, and terrorized by the scoop-hungry media.

Not only are there photogs and reporters everywhere, New Yorkers are social media addicts. They have their smartphones ready and will live tweet, Instagram, and Vine the embarrassing moments you'd wish you could have back.

The unrelenting media (and social media) blanket that would cover the Biebs in New York would actually be good for him. He'd learn really quickly that the power of the press is not to be trifled with, and that sometimes flying under the radar is the better option… rather than putting a target on your back.

Not to knock Justin's popularity or influence, but the sheer mass of star power- heck, just the hordes of PEOPLE on the streets every day in the Big Apple is enough to put anyone in their proverbial place. You can't help but look at yourself as "just another face in the crowd" instead of king of the hill. Sure you are the idol when you are on the concert stage or in a crowd of Midwest teenage girls, but what about when there is authors, artists, actors, and artisans of world-fame sitting in the same restaurant as you? At the same move premier? At the same after-party? You suddenly no longer feel like all eyes are on you. Because to be frank: they're not.

Justin needs to feel less pressure to perform. One could even argue that he is doing what he is doing off-stage because of the pressures of being on top of the world. In New York, he would learn that sometimes better to share the limelight- even RUN from it!

New Yorkers, celebrities and "commoners" have learned that peace, quiet, and solitude is sometimes what a guy really needs after being around clamor and distractions all day every day.

Justin should totally get a condo or an apartment. Maybe not even buy one. Rent them short term and bounce from place-to-place for about 6 months to discover where he fits. Get a roommate even. (How'd you like to volunteer your place? *wink* *wink*)

He could live in the East Village or Greenwich Village to soak up some fresh culture, or in Grammercy or the Lower East Side to meet some new "ordinary" friends to hang with.

No matter what nabe he ended up landing in, the close proximity of neighbors, thinner walls, smaller closets, minimum parking, and shared amenities like swimming pools, gyms and elevators would give the Biebs a deeper sense of community and belonging. The housing market in New York trains you very quickly that you can be happy and content with less.

If he can make it here, he'll make it anywhere.

New York has a way of changing a person. Anyone who has grown up here probably just thinks that this jungle of concrete, noise, people, and awesomeness is just called "life", but for those who moved here: you know what we're talking about.

Once you take that step and move to the City, the fight begins. The fight for your financial success, for your big break, for your very identity. It is the fire of difficulty that makes you grow up or get out. You'll go through the school of hard knocks with an A+ because you simply can't skip out on class like you can elsewhere. Because there is nowhere to hide. Nowhere to run. The City has you in its jaws and it wont let you go until you surrender to it. Until you give up trying to conquer It and let It conquer you.

What do you think? Could Justin make it in New York? Any suggestions for him? Tweet your thoughts to #MoveJustinToNYC